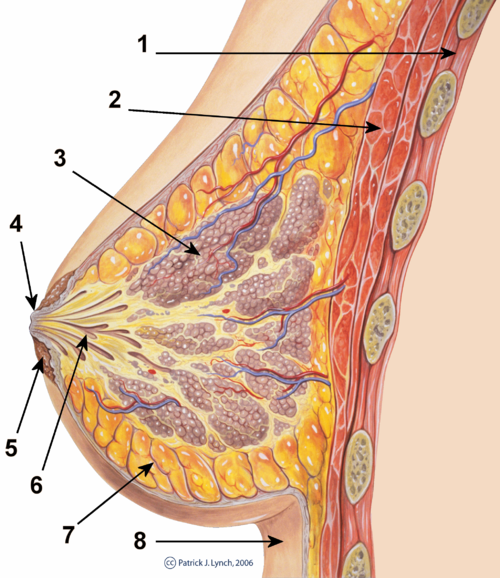 The breast or mammary gland is a highly efficient organ mainly used to produce milk and is a mass of glandular, fatty, fibrous tissues. Mammary glands are exocrine glands that are enlarged and developmentally are modified sweat glands that are actually part of the skin. They are also classified as tubualveolar glands and are located in the breast lying on the top of the pectoralis major muscles. These glands are present in males and females; however, they normally function in the latter gender only. 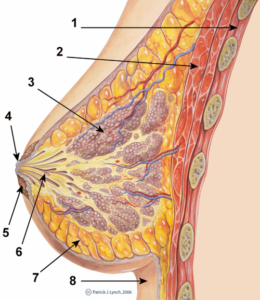 The biological role of the mammary glands is to produce milk to nourish a newborn baby and to pass antibodies needed for baby’s protection against infections (passive immunity) while the immature immune is initiating its function.

The breast is internally composed of the following parts:

Internally, the mammary gland is composed of 15-25 lobes that radiates around the nipple. Each lobe consists of about 20-40 lobules, a smaller milk duct that contains 10-100 supporting alveoli.

Glandular tissues are responsible for milk production and transportation which is composed of:

Connective tissue supports the breast. Cooper’s ligaments are fibrous bands that attach the breast to the chest wall and keep the breast from sagging.

The breast is externally composed of the following parts:

The function of producing milk is regulated by hormones. Stimulation of the female sex hormone, estrogen, causes the development of glandular tissue in the female breast during puberty. Increase estrogen levels during pregnancy causes the breast size to increase in size through the accumulation of adipose tissues.

Presence of progesterone stimulates the growth and maturation of the duct system. During pregnancy levels of estrogen and progesterone rises (levels are needed to sustain pregnancy) that further enhances the development of the mammary glands. This is the main reason why pregnant women has larger and more enhanced breast.

Another hormone important for the implementation of mammary gland function is the presence of prolactin and oxytocin. Without these hormones, milk will not be produced and ejected out of the breast. Prolactin from the anterior pituitary gland stimulates the production of milk in the glandular tissues while oxytocin causes the ejection of milk from the glands.