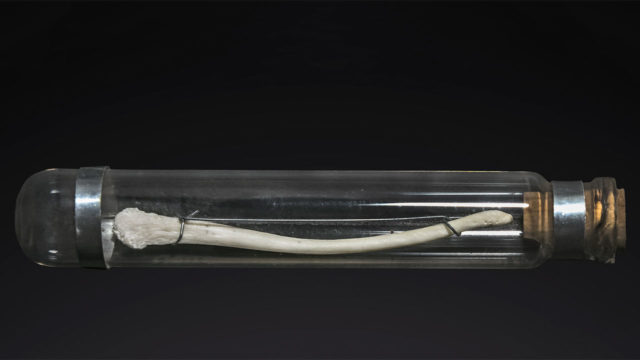 Despite slang terms that imply otherwise, the human penis contains no bones. The same cannot be said for many of our closest evolutionary relatives: Chimpanzees and bonobos both have penis bones (a macaque one is pictured), also known as bacula. To find out why some primates have the feature whereas others don’t, researchers traced the bone’s evolutionary history through time. The baculum first evolved between 145 million and 95 million years ago, the team reports online today in the Proceedings of the Royal Society B. That means it was present in the most recent common ancestor of all primates and carnivores. Why some descendants, like humans, lost their bacula appears to be due to differences in mating practices: In primates, the presence of a penis bone was most tightly correlated to increased intromission duration, i.e. how long the penis penetrates the vagina during intercourse. Longer intromission times often occur in species with polygamous mating practices—where multiple males mate with multiple females—as seen in bonobos and chimps, but not humans. This system creates an intense competition for fertilization, and one way for males to reduce a female’s access to additional mates is to spend more time having sex with her themselves. The penis bone facilitates this by supporting the penis during sex and keeping the urethra open.